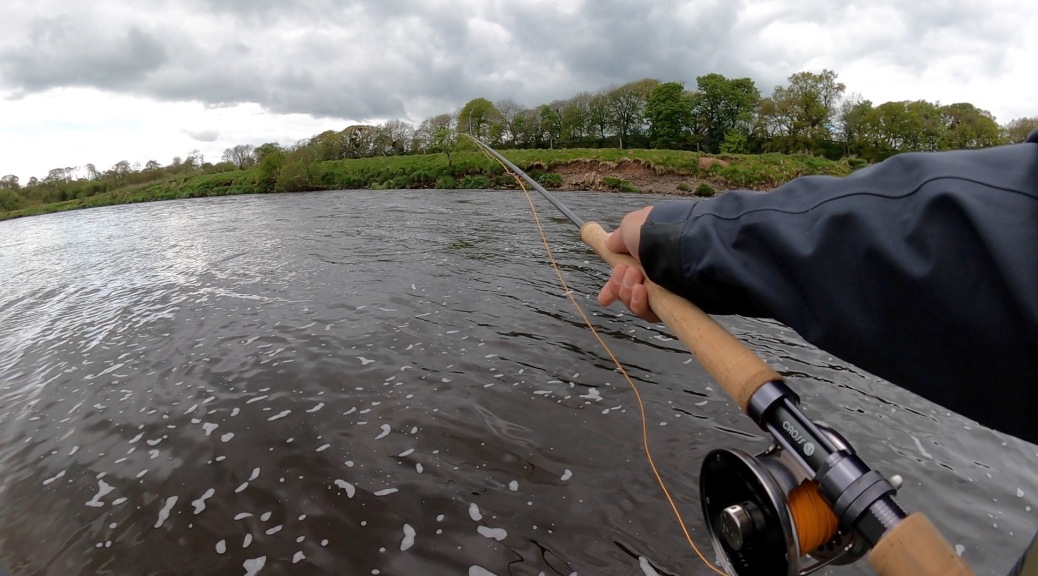 A favourite beat on the Annan and after weeks of patiently waiting for a decent rise in levels finally Saturday looked like a sustained rise in height at Cleuchhead.

On arrival water was high and coloured and dropping – ideal but a chilly cold wind blowing upstream.

We covered the lower river with spinning rods initially and almost immediately I managed to lose a half decent trout to the rapala.

The morning was hard going for me after this but produced some lovely brown trout and sea trout for Kevin and Malcolm.

The afternoon saw me with the fly rod and a Dee Monkey on the upper section of the beat. As if to mirror the morning I had just begun when I got a decent tug as the fly swung across the main stream and a healthy bend in the rod. Sadly the bend in the rod lasted only seconds following some serious head shaking as the fish made it’s exit. The chilly cold wind continued to make its presence known as I continued to fish down the pool at Jimmy’s before opting for a walk to the car and a coffee.

Kevin, Lewis and Malcom continued to add to their tally of browns and some really great looking sea trout up to 3.5lb and managing to move at least one salmon.

A great day however for myself, despite being out-fished yet again by the McCormick Clan. The total for the day I think was something like nine brown trout and at least five sea trout.

Another enjoyable day at this lovely beat on the Annan 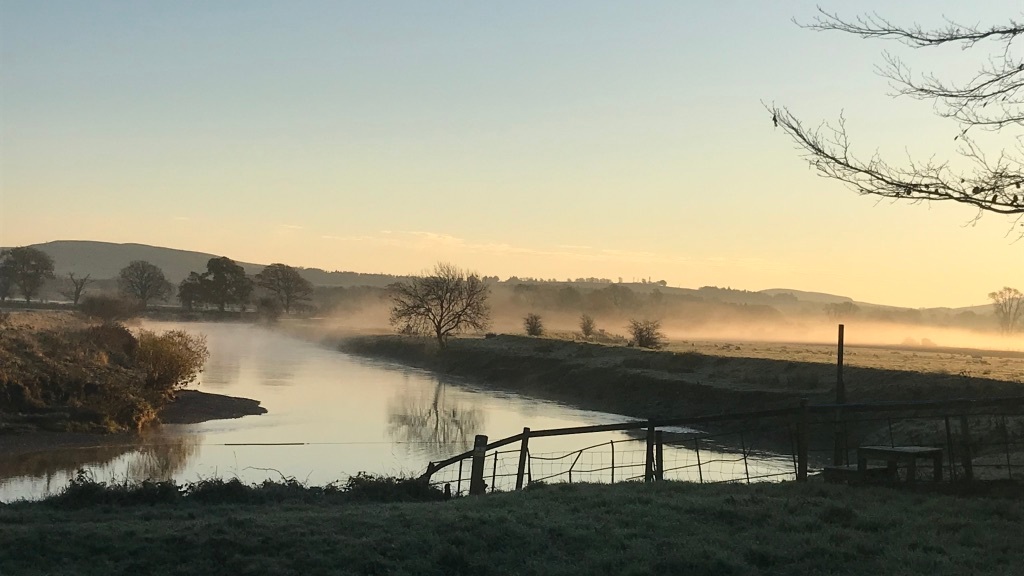 Needing little persuasion I gladly accepted a suggestion from my friend and experienced angler Pat for ‘one last’ outing for the Season. To be honest I had resigned myself to packing up the rods for the season. However I had not previously had the chance to explore this further part of the beautiful River Annan and what an absolutely stunning section of the River Annan.

Having had some really valuable and helpful tips regarding this beat from my friend Kevin I arrived full of anticipation. Pat having arrived before 8.00am was already visible upstream of the car park casting in the mist that still clung over the water.

We spent some considerable time, perhaps too much, working our way down from the corner above the car park carefully covering each section, some more than once. Fish were evident in abundance from the point I arrived and some very sizeable fish too. However with fish jumping behind, in front of us and over the line neither of us seemed to be able to tempt them despite our best efforts and various fly offerings.

Having regrouped at lunch time to compare Kevin’s notes and maps and agree tactics we set-off reinvigorated determined to seek out some of the pools and runs downstream from the big pool at the car park.

We fished below this main pool, a lovely big run which is deep on our (right) bank but shallow in the middle of the river entering at the first point where depth permitted. In hindsight this was perhaps not the smartest tactic as fish most likely were also lying close to our bank. However like gold prospectors we were blinded by the sight of yet more fish rising just off the far bank once more.

We fished this whole section steadily, enjoying the easy wading in the middle and the good flow. Despite our best efforts neither of us however managed to connect with or even rise any fish despite there clearly being fish around once more. Two other anglers passing us confirmed that they too were struggling to gain the interest of the fish. Undeterred we decided to check out the section below this straight. This long run we had just fished ends with a right bend and an enticing pool before it widens into an enormous pool and ox bow lake. Pat opted to fish down into this really big pool and I fancied the bend and pool below the straight that we had just fished. The choice of my 11ft 7wt Sage X Switch setup seemed to be well suited to this water.

As I fished this section I was treated once again to fish showing above and below me and even over the fly as it landed just off the far bank of this bend. Curses had long given way to wry smiles as I now began to accept the fact that despite the number of fish around they simply did not appear to be in ‘the mood’. With the light fading and the sight and sounds of a large flock of geese on the wing I decided to call it quits and go find Pat.

There certainly were a good number of fish in the pools that we had fished and we had only scratched the surface of the pools and sections of this beautiful beat. We had not even covered the additional pools downstream including ‘The Creamery’ etc.. but agreed that we had thoroughly enjoyed the day and this beautiful beat. Back at the car park we learned that neither of the other rods had yet managed to entice a fish which whilst surprising given the numbers of fish in the system was in some way ‘reassuring’ and not down to our skills, tactics luck or whatever.

We both agreed that we would love another day on this truly lovely wee section of the Annan. 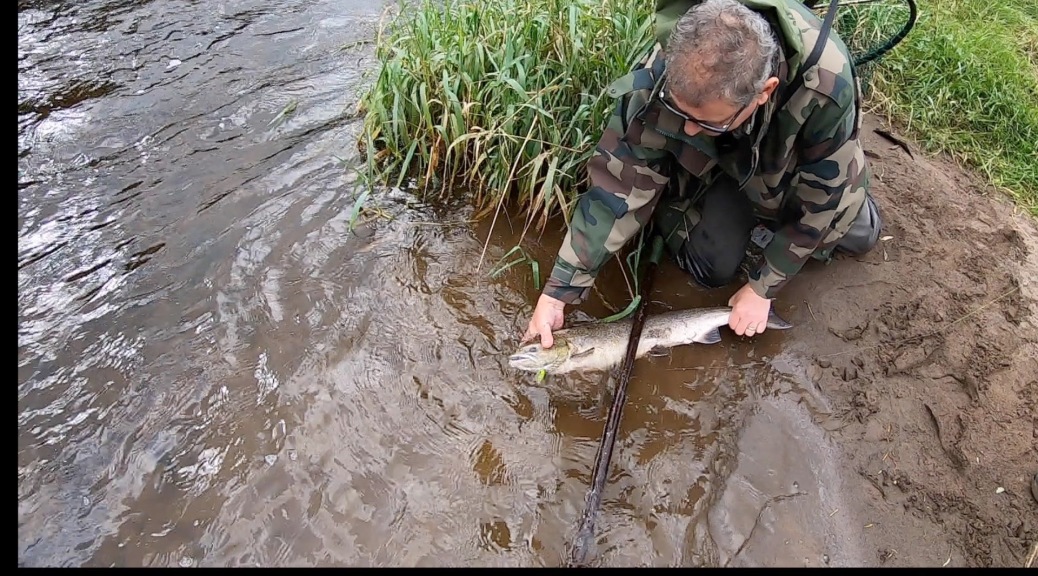 Another trip and another very enjoyable day on the Annan at Cleuchhead. Water levels were lower and less fish either about or interested than our last trip but a great day nevertheless. Great surroundings, good company and lovely water and a few fish what could be better? A short video summary of our day. 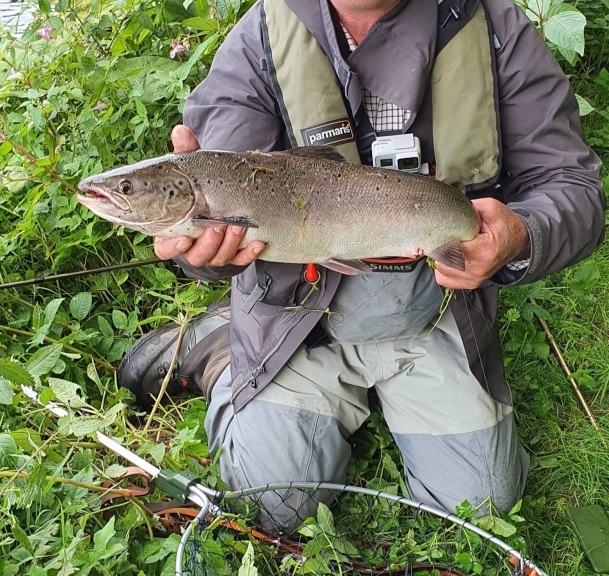 When my good friend Kevin messaged me and asked if I was interested in joining him for a day on the Annan on Cleuchhead the following Saturday then there was nothing to think about.

Kevin and I had fished the Annan a few weeks earlier at Hoddom which was my first experience of the Annan and a great experience albeit we failed to connect with any silver. Kevin did as normal manage to produce some results in the form of several nice sea trout and brownies in contrast to my all too often blank session. The water at Hoddom on the day was high and coloured requiring the spinning or ‘cheating stick‘ to come out. I have to say that spinning for salmon is not my preferred method compared to the fly, perhaps it’s a confidence or comfort thing.

The day on Cleuchhead got off to a frantic start as I managed to sleep in and as the driver I had a mad scramble to get out of the house whilst trying to both waken up as well as check to ensure I had not forgotten anything. I was due to pick up Malcolm, Kevin’s Brother and his fishing friend Colin who were of course already waiting as I drew up to collect them. The abuse and ribbing continued all the way down the M74 with me then managing to overshoot the exit to Ecclefechan just to crown things off.

Upon finally arriving we excitedly setup and decided fishing pairs, the river was big and brown and once more the ‘cheating stick’ was considered order of the morning at least with fly possible after lunch.

Kevin, his Son Lewis and myself headed downstream with Kevin kindly and generously explaining the various pools, lies and sections of the beat as openly as always.

Watch video to see what happened next.

It was not long before the shouts of fish came as Kevin’s rod bent into a good fish which after racing and leaping around the pool turned into a lovely Salmon of around 9lb. A great start and I really hoped that I was not about to be ‘out-fished’ by both of the McCormicks yet again. 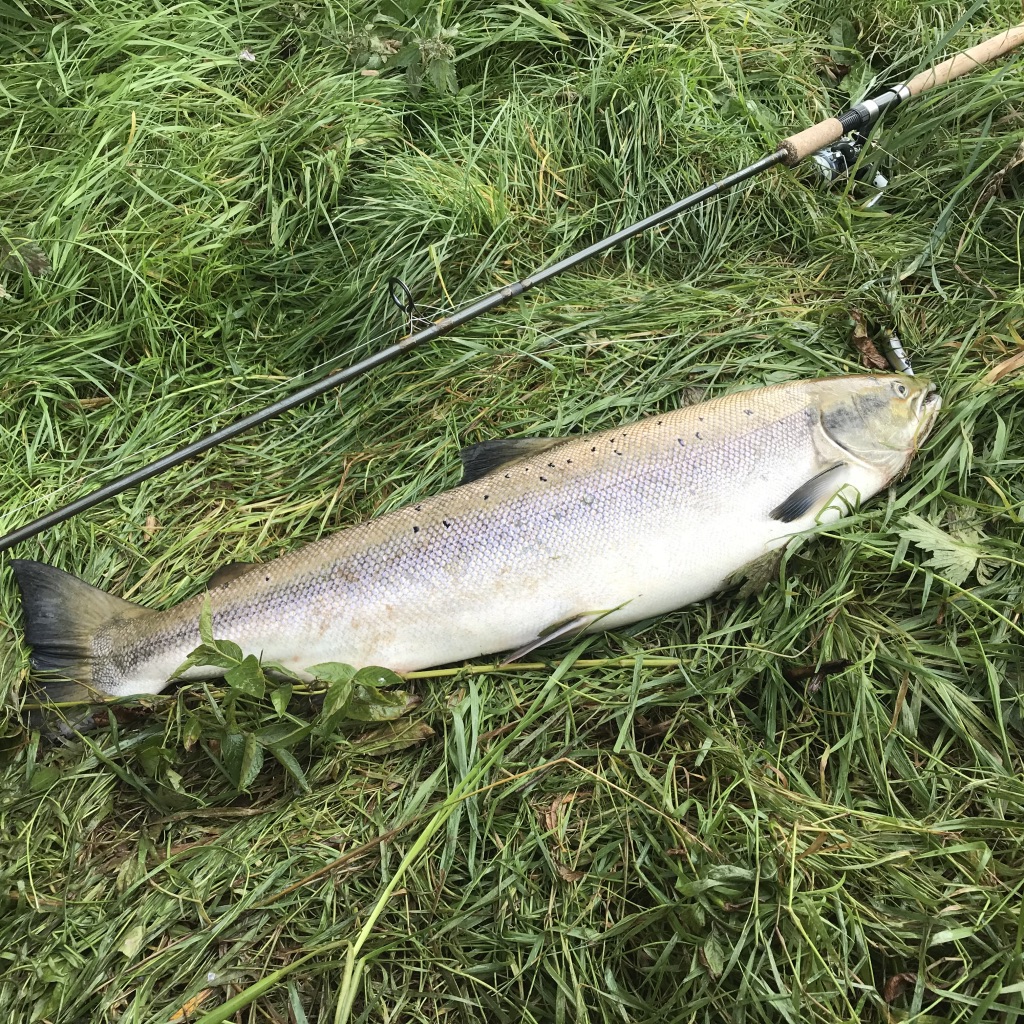 Feeling that the vision lure I had on was not working for me even after only twenty minutes or so I then opted for a more familiar lure in the form of an orange and gold rapala (tay rigged). On the first, or second, cast suddenly I was into a decent fish which initially seemed intent in only going downstream or airborne once more. After Kevin deftly landed the fish on the slippery bank I promptly announced it was about 10-11lb only to be brought back to reality by Kevin shouting “no it’s 9lb”. Indeed landing fish was tricky given the steep overgrown bank and high water conditions any option to unhook fish within the net was simply too difficult.

During the next hour to my absolute delight I managed to hook two further beautiful fish around the 7-8lb mark both strong and reasonably fresh run. In fact after landing the second fish I began to dare  to think this could possibly be my lucky day and I might just might even manage to beat Kevin for the first time ever. At 2-1 this seemed a real prospect I mused and when I hooked a third fish then I was cock a hoot. For once the mobile phone traffic between Malcolm and ourselves was us calling them to report ‘another’ fish landed.

Just before lunch Kevin shouted as he leaned into what looked like a decent double figured fish and after a real tussle a magnificent fish of at least 20lb was in my net. Unbelievable fish and fantastic morning with five salmon between the two of us and several fish dropped. To make things even better Malcolm had called to say that he had lost two fish but Colin had landed a fish of 18lb and also dropped two fish.

After lunch and rotating beats we headed upstream towards ‘Alice’ and ‘Jimmy’s” pools feeling buoyed by such an incredible morning. Despite continuing to fish hard it seemed to us that the fish had ‘gone off’ with little but a few trout and a couple more dropped fish to show for the afternoon. We learned later that Malcolm had gotten his tally started finally with three salmon of 15lb, 10lb and 3lb all fresh! Colin meantime had a major adrenaline rush when hooking a massive fish of 25lb which promptly emptied his reel of line in one huge run which sadly ended by being broken off before he could react…..woah.

Whilst we were packing up I could only keep repeating the same phrase ….”what a day!”. The Annan Bailiff’s had asked in the morning if we could send them some photos for their Facebook page, well we certainly can do so. ‘What a Day!” Cannot wait to go back, maybe get a fly line out next time. A day to remember in the coming Winter nights….even if it was with the “cheating stick!”

A huge thanks to Kevin, Malcolm, Lewis and Colin for freely sharing their knowledge, advice and company.

A light hearted account of my Angling exploits, successes, failures and learnings amidst Scotland's beautiful Rivers and Lochs