Rumour had it that the barrier gates were to be opened on Tuesday and sure enough I got a message via Facebook that “gates were open now…”.  Apparently Loch Lomond levels had reached sufficient height to allow gates to be lifted. So given the choice was either home chores or fishing then within an hour I was parked at Bonhill Bridge and setting up. Noticed from water guage that water was still rising and coloured with lots of debris being washed downstream. Deciding that eventually water would settle and clear  If ever fish would be encouraged to run then it was today! High tide was not until around 8:30pm however undeterred I started at The Bonhill Pool with a slow sink tip and a size 9 cascade. Fished slowly down the pool, the water was still murky and lots of weed, branches and rubbish coming downstream being collected it seemed by both my fly and my landing net behind me. Completing the pool and after a break for coffee and catch-up with other anglers I headed for The Piles having changed fly for one of John Richardson’s hi viz cascade doubles.

Another angler at the piles was spinning without any contact so far but was quick to point out that this was the best water conditions for months. Starting at the top bend I slowly worked down the run wading deep. Water was starting to settle and whilst still a lot of weed around things seemed to be clearing. Reaching the middle of the run a couple of bait anglers arrived and set up below me. Not a problem and I decided to take a break and rest my legs, the bait anglers were quick to point out the best runs and to remind me not to discount fish lying close to the near bank. After a great deal of chatting I decided to start once more at the top of the run and work my way down once more before having to quit for the day as I had an appointment at VOLDAC that evening. Re-covering the same run without any contact or seeing any fish moving bar a small fish rising just at the end of the run I covered the whole stretch with the bait anglers having decided to move upstream. I was forced to call it a day at 16:30 with some regret since water was clearing and high tide was due later that evening. Nevertheless a good few hours filled with expectation of a running fresh fish. 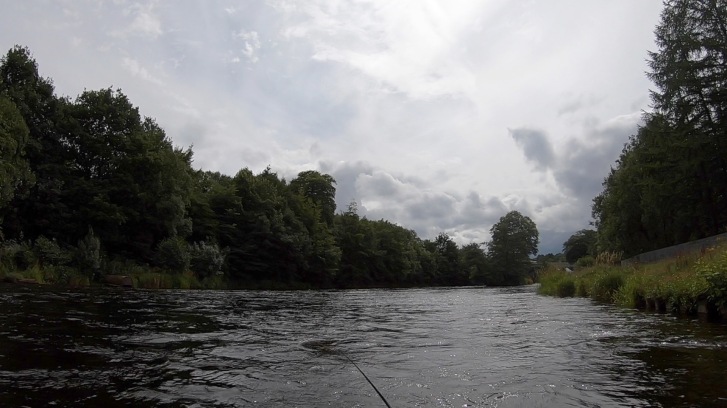