Skip to content
Date: May 13, 2019Author: The Dogged Angler 0 Comments

A beautiful Saturday morning and with only a few hours of available fishing time I headed to meet my fishing pal at Levengrove to try for some sport with the Clyde sea trout. Upon arrival we realised that the tide was still relatively high and decided to move down to Cardross by which time the tide should be at a better height.

A cold north westerly wind deceived the bright sunshine and it was decidedly chilly as we waded out to join several other anglers with the same idea. Whilst my preferred method is fly we were spinning with small lures which had proven successful in the past. Despite the difficult cold bright conditions a couple of anglers above and below us hooked into a couple of nice fish, one landed and one decent looking fish lost.

For ourselves then despite our best efforts and various lure combinations then there were no takers other than mussels which I noticed seemed to be actively taking my lure rather than being simply snagged! My first cast produced a sharp tug which I initially mistook for a fish only to find a small bunch of mussels where one had the hook firmly between its shells.

A great wee enjoyable spell despite the absence of any offers and it was just great to get out for some fishing in an otherwise non-fishing weekend. The only downside being that in my case my wading depth destroyed yet another IPhone despite it being in my top pocket of my wading jacket….. judging by the depth I seemed to be in a “hollow” which proved costly in the end. Looking for a waterproof IPhone lol 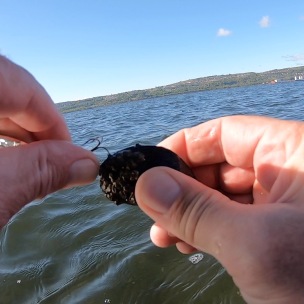