Having spent the previous morning on the River Fruin without seeing a fish I decided to explore the upper Endrick for the first time. Being a creature of habit had it not been for the generous and helpful advice of friend and fellow angler Lee Taylor I would probably have stuck to lower more familiar beats. I am therefore indebted to Lee for his kindness in so freely sharing his knowledge of the section and water with me.

Arriving around 9.30am I had the pleasure of meeting and chatting with another angler Pat as we were setting up. After exchanging best wishes he set off towards the river as I opted for a coffee before heading down to the water.

I was filled with more than the usual buzz of anticipation that we so often have at the start of an outing as there had been good reports all week of decent fish being landed or lost on this upper section of the river. Arriving at the top of the run I had planned to fish (“Coolie’s Lynn) there was plenty of water as I began fishing down the run (‘”Lynn”) – intermediate with fast sink poly and a wee copper tube. A fairly narrow part of the river so plan was to get down quick and maximise short swing of the fly. I had been forewarned about the trees on both banks and soon fell foul of them losing around two or three flies in short succession until I improved my range a little. The temptation to edit out the hang ups in the trees was there but hey this is an honest account of my morning and was part of the challenge.

The water and in particular the far bank beneath the overhanging branches just looked fishy. As I worked my way down the run a fish rolled mid current around 30 yards below me. Senses heightened and having just replaced the fly once more for a small willie gun orange hothead copper tube I slowly and carefully covered the rise several times without success.

With thoughts of the rising fish now forgotten I continued down the run and carefully wading around trees behind me, just below a small burn. Now roll casting due to trees behind me casting beneath branches opposite was a real test. Suddenly the magic happened as I landed the fly in what looked like a perfect spot and mended the line! A very gentle take which I initially mistook for a small trout suddenly transformed into a take followed by a violent bend in the single hander which began to bounce as the fish started to run. Initially resisted lifting for what seemed an age as I allowed the fish to take and turn pulling some line and fighting every voice in my head and instinct to lift immediately!

Following a series of prayers that it would stay on and a series of runs including one into the bank beside me and the trees the fish eventually slipped over the net. The gye net I have carried all season was however an “unfamiliar” piece of equipment to me caused some problems as I tried to release the buckle just adding to the anxiety of dropping the fish. 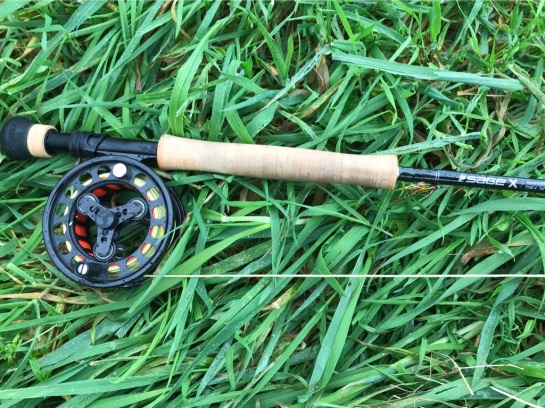 Happy days – my first Endrick salmon a coloured fish of around 8-9lbs a little thin perhaps but a first from the Endrick nevertheless. The fish was carefully unhooked in the net using forceps before being revived and gently released.

Now having spent many trips and hours capturing video of views, landscapes, casting and not too many salmon (none) some of you will be wondering where the video of the fish being landed is. During the adrenalin and excitement then I have to confess that I failed to note that the camera was actually running and this numpty then ordered it to “start recording” which actually had the opposite effect of turning the camera off! I know all the technology in the world and it comes down to the stupidity of the operator. Hence the short footage of the hookup. 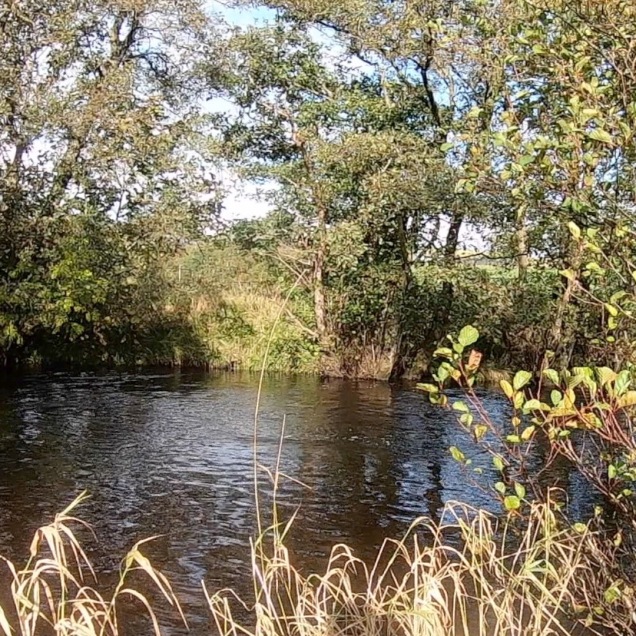 Once both the fish and I had recovered from all of the excitement and my pulse returned to almost normal I fished on for another hour or so without further action. By around mid day I decided to call it quits and head for the car and some lunch before heading home. Not a bar of fresh run silver but to me just as prized as a first salmon on this amazing wee river.

A great day and thoroughly enjoyable – not a monster nor fresh run but still a first and a good few hours to savour. Body, mind and soul refreshed I made my way to the car reflecting on a great couple of hours. It was great to meet Pat and Max and once more I wish to acknowledge and thank Lee for freely providing invaluable advice and tips on this new stretch.

We are truly blessed to have such a range of beautiful water to choose from in our system.