River Endrick and the end of the Season approaches

As the end of the Season fast approaches Saturday found me exploring some new pools and runs on the River Endrick thanks once more to knowledge and advice freely shared once more by fellow angler Lee Taylor.

Upon arrival on this upper part of the Endrick and after a chat with the farmer whose land I would cross I headed for the river across fields and burns. My plan was to explore and fish two new sections of the river for the first time. It was immediately apparent that the river had risen by around a foot or so since the previous day when I had fished further downstream. I immediately regretted not bringing my wading stick as the heavily peaty coloured water made judging the depth impossible. With shady wooded banks and some great looking runs and pools beneath the overhanging trees this was a truly tranquil section of the river.

After adapting my setup to conditions – a floating line with a 10ft fast sink tip, short leader and a small red frances copper tube I was ready. The advice had been to cross the river here and fish from opposite bank towards bank I was currently standing. However without the wading stick and being a ‘chicken’ I made the executive decision that crossing the river at this height was not a good idea. I therefore started heading down to the next mark fishing wherever water and access permitted. After checking several times (with some phone calls and mr google’s assistance) I arrived at the next intended section – a long tree lined bend in the river with some lovely looking runs and pools beneath the branches on opposite bank. Thankfully this area was wadable allowing some casting clearance from trees behind me. I saw and heard several decent fish above and below me only added to the anticipation.

Gradually working down this run I soon came across a fellow angler and owner of the other vehicle parked when I arrived. He was grinning from ear to ear and just stowing the net after landing a wee grilse and his first salmon on the fly. Having congratulating him I continued to fish down behind him until he eventually disappeared after opting to move downstream.

Despite my best efforts I said goodbye to at least four flies, and leader in some cases, donating them to the overhanging trees on the far bank. Joy and a silent thank you came occasionally when the fly sometimes hit a branch or leaf opposite before sliding off and into the target water and landed exactly in the area intended! I noted some of branches were already adorned with flies from some similarly unfortunate casts like a Tibetan prayer offering of flags or cloth. Pink flies seemed to be particularly in evidence. There were certainly fish in residence here as they made their presence evident showing above and below me several times just to keep me engaged. 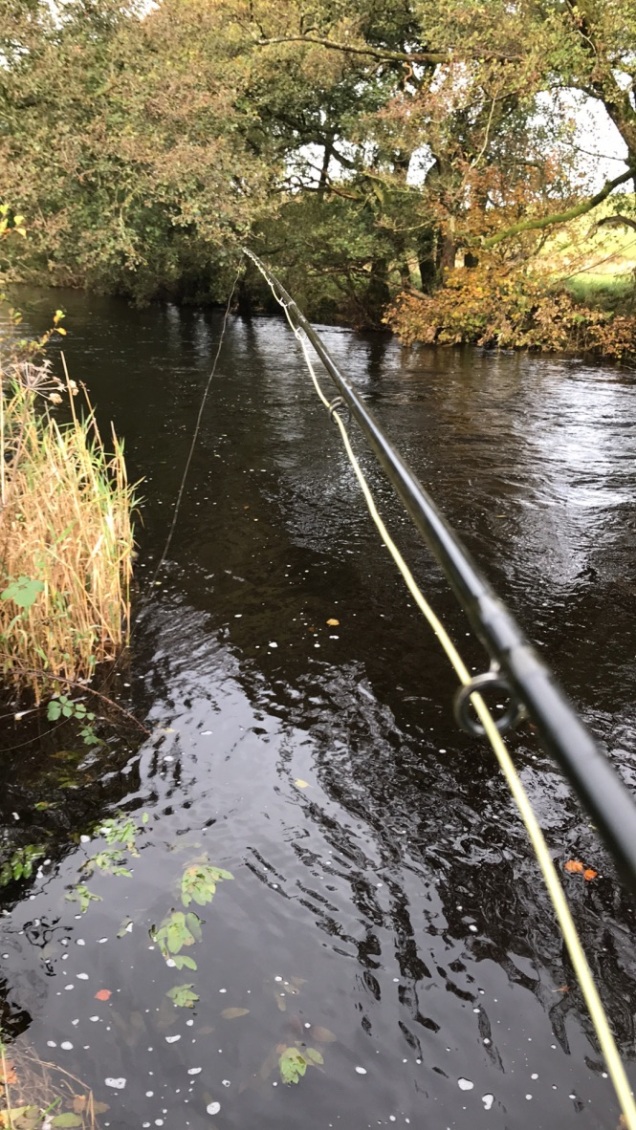 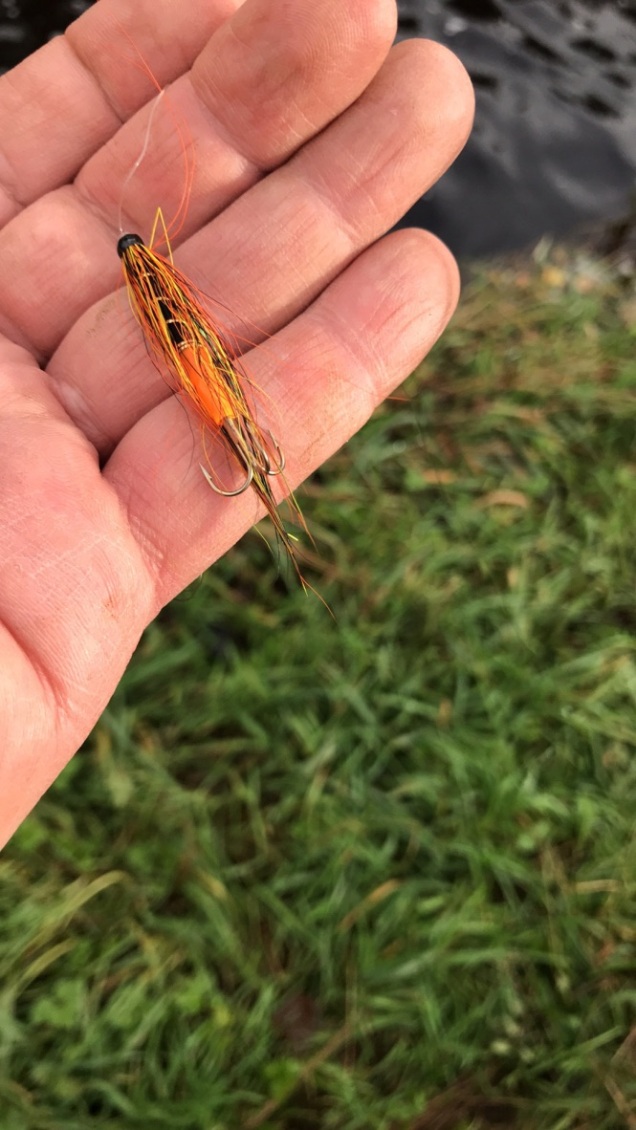 Stopping for a break after one strong ‘pull’ but no connections I reflected again on the beauty and solitude of this part of the river with the Campsies rising behind me tree lined banks and abundant wildlife of this wee river as it meanders across the fields of the flood plain.

Continuing I carefully resumed fishing slowly down this section to where it ends in some fast running shallow water before deciding to head back to the car and some lunch.

Given the extremely muddy swampy conditions at the car park I opted to drive down to another ‘drier’ section downstream and have lunch there. Upon arrival several other fellow anglers and friends were already setting up or breaking for lunch. During lunch experiences, successes and failures and flies were exchanged including the hooking of a small grilse and a wee sea trout landed.

Following lunch, coffee and a re-charge I opted to give this section an hour or so and after replacing the ‘missing fly’ from the ‘diminishing’ contents of my fly box with a size 10 red and yellow flamethrower gold double I headed off.

I slowly and carefully made my way down this now deeper run and pool than it had been the day before. With the target once more being the opposite overhanging bank I had now developed a technique to dislodge the fly when hangups occurred which they of course did. It worked to some degree and involved pulling and quickly releasing the slack line to try to dislodge or ‘ping’ the fly loose from the branch opposite before resorting to the normal pull and 50/50 hope. I had thought about tackling up to heavier leader just because of this issue but opted against this as I prefer to fish as light as possible for several reasons. 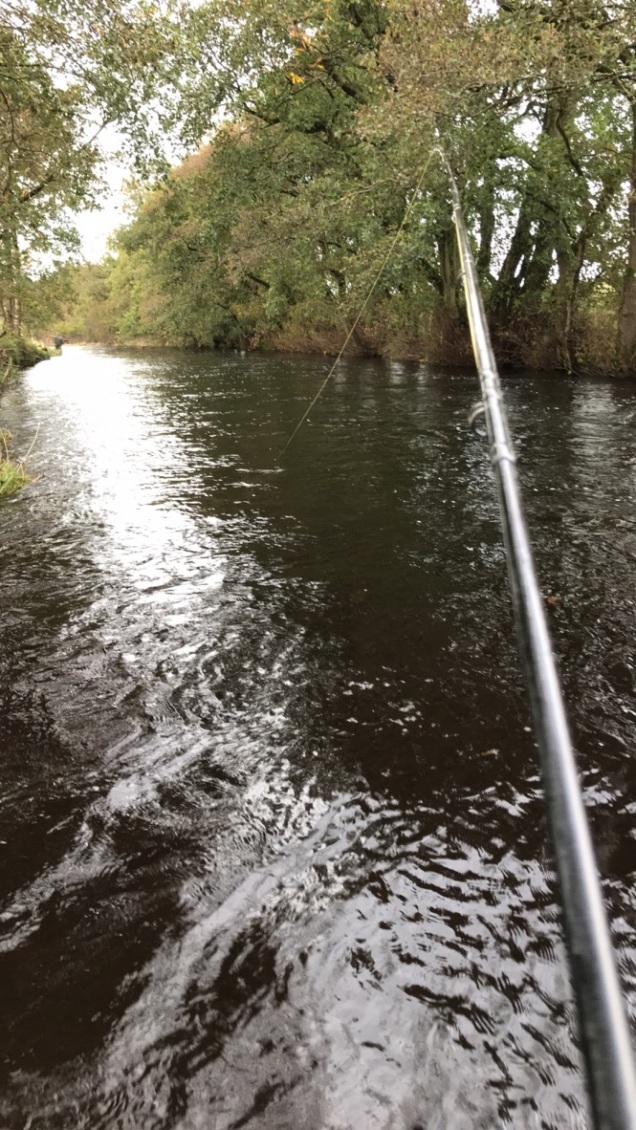 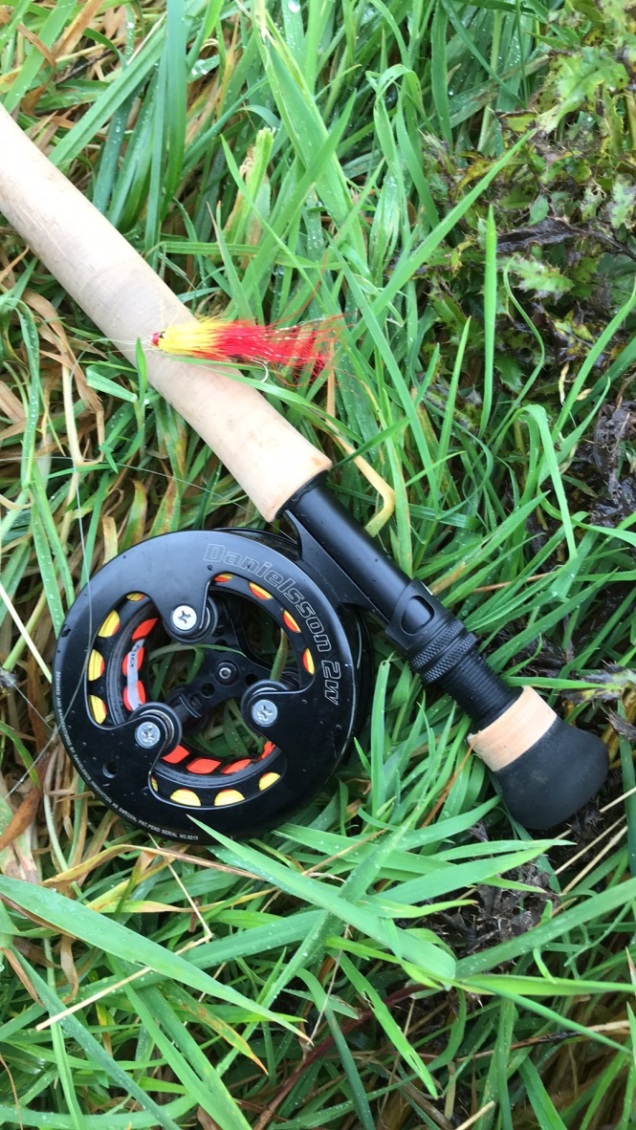 After about a further hour or so fish were showing but no takers I exited the end of the pool and with my back now complaining about the cold water I decided to call it a day. It had been a good day as despite any fish.  I had found (eventually) and explored some new areas of this beautiful wee river and had thoroughly enjoyed the experience and the day. Heading back to the car I was already scheming as to how I could squeeze in one last outing before the end of the Season.