Despite previous failures to hook and land my first Lomond salmon I was eager to get on onto the water. You can’t beat a tryer after all as they say. Having checked the weather forecast about a dozen times during the past two days the boat was prepped and loaded. After only a few clumsy collisions as I reveresed out of my new mooring onto the river I was off slowly making my way upriver behind another angling boat, very slow.

As I left the river and entered the loch I noticed the flotilla of Ranger and support boats and suddenly remembered it was the date for “The Great Scottish Swim” event with contestants already ploughing across Drumkinnon Bay. I headed east past Balloch Park thinking that the loch would most likely be busy today with this being a bank holiday weekend. I continue to be surprised how shallow the section off Balloch Park is even well offshore. My planned route was to troll along the east bank past Boturich before heading across to Inchmurrin and along the south shores of Inchmurriin, Creinch, Torrinch and Inchcailloch. From there I would take a familiar route from Blamaha north to The Ross Isles up to Rowardennan and then across the loch and fish homewards down the west shore.

Being a fly fisher and new to this trolling business then amongst a multitidue of other subjects that I have been trying to understand is “trolling speed”. As always other anglers have been more than helpfuil with suggestions. Dependent upon lure type then most seem to agree that a brisk walking or jogging speed is best. Having no idea as to what speed I am actually trolling at I decided to measure my trolling speed on this trip. I used an App for this on my Iphone called”Speed Box” and after several readings then it appeared that my idea of a fast walking speed was 3-4 knots. For me to troll faster I think will need more familiarity of the various shoreline and underwater features (hazards!).

Fished up and along the east shoreline having covered the north shores of Inchmurriin, Creinch, Torrinch and Inchcailloch without any offers, not even a pike! I was captivated by a pair of magnificent Ospreys perched above me on the shoreline, beautiful. 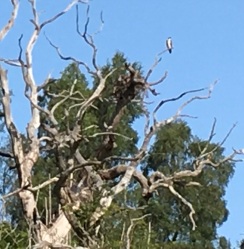 Passing Cashel campsite I slowed to allow a windsurfer to come out from the shore only to almost colide with him five minutes later as he decided to return to shore! Despite my shouts and curses he was blind as he was behind the sail on his board and could not see me (again). Reminder that I must fit that horn lying at home to the boat. Sailing up to The Ross Isles I pulled in at my favourite wee bay for lunch and stretch of the legs.

Heading out after lunch I decided to give “The Ross Isles” a quick figure of eight before I headed north towards Rowerdennan. The wind was now starting to blow fairly briskly (for me) from the north and just below Rowerdennan I decided to cross the loch in hope that west shore would offer some shelter for the run home. A bit of a swell as I made my way across the loch trying to keep bow into the wind before reaching quieter water on the west bank.

Fishing as close to shore as possible and exploring as many of the bays and marks as possible I made my way down toards Luss. No action or interest stopping several times to clear weed or try a change of lure. Continuing down I was reflecting on the days events, or lack of them when some of our fellow wet bike loch users screamed across my bow at Duck Bay Marina clearly in some hurry to get somewhere! As I approached the river mouth I was surprised to see that “The Great Scottish Swim” was still underway as I was directed clear of Drumkinnon Bay area by the Rangers.

Another good day on the Loch despite seeing or hooking any silver, chatting with some returning fellow anglers at the club then there were no reports of anything landed from the loch that day. Whilst not good news in itself I admit I was heartened at this information which made me think at least it’s not just me then.